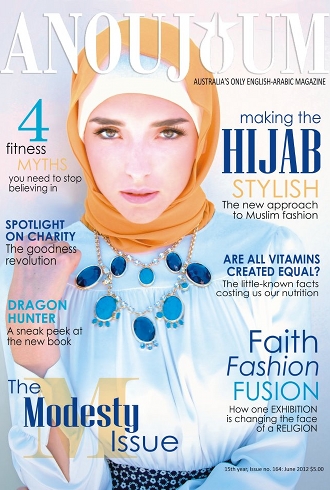 Zoe Loveland might have been born and bred in Western Australia, but she’s just become the first model to be featured on the cover of an Australian magazine wearing a hijab. Anoujoum is Australia’s only Arabic-English magazine written for a dual audience, aiming to fill its pages with “cultural, beauty, lifestyle, charity, health, and celebrity news to entertain and inform.”

That objective demonstrates that Anoujoum is not a fashion title but a lifestyle one, though June’s ‘The Modesty Issue’, featuring Loveland, has a strong accent on the sartorial. “Making the Hijab Stylish: The new approach to Muslim fashion” is the caption accompanying the picture, while other prime cover real estate is given to a style-focused exhibition currently on show at Sydney’s Powerhouse Museum: Faith, Fashion Fusion explores the city’s emerging modest fashion market and the work of a new generation of fashion designers, retailers, and bloggers offering stylish clothing and fashion advice to Muslim women.

And before anyone starts making comparisons to culturally callous situations like American Apparel’s awkward attempt to make rice paddy hats mainstream, the move in question has already been praised by the Australian Muslim Womens Association. Makes sense seeing as Anoujoum is simply promoting Islamic fashion as modern, beautiful, and wearable rather than indulging in any hipster racisim, though some might still see it as odd that Loveland is no more Muslim than her blonde-haired, blue-eyed counterparts.