Despite the fact that Kate and Wills announced that they wouldn’t be trying for a royal baby until 2013 due to the fact that their schedule for 2012 is already jam packed with the Olympics and the Queen’s Jubilee, Kate’s Mum has only gone and let slip to British Now magazine that the happy couple are actually planning to conceive sooner than initially planned. She confessed that the couple’s first year of marriage has been better than they could have ever imagined, and so, they are desperate to have a baby as soon as possible. So get ready to hear the patter of tiny royal feet very very soon! Kate was pictured earlier this year walking her puppy Lupo through Kensington Gardens, could it be this addition to the family that has got her feeling all the more broody?

Baby plans aside, Kate has been busy with royal engagements over the weekend. Friday saw her attend the Olympic Concert at the Royal Albert Hall, which celebrates the British Olympians who are set to participate in this summer’s games. On Sunday, she cheered on William and Harry in a charity polo match at Coworth Park where she also had Lupo in tow, how cute!

What did she wear?

Now that you know what Kate got up to at the weekend, the resulting question upon your lips can only be, what did she wear? For the concert, she opted for yet another Jenny Packham number, in the form of a floor sweeping blue Spring 2012 dress with a Swarovski crystals embellished lace bodice (snagging our Look of the Day). It was also a refreshing change to see Kate’s hair in an up-do. That detailed bun must have taken quite a few hours to do!

It’s not easy deciding what to wear to an awkward event such as a polo match, especially given our unreliable British weather, but Kate seemed to pick the perfect outfit for the occasion on Sunday. She wore a printed green Libélula silk Rebecca dress and teamed it with a pair of Stuart Weitzman cork wedges. Now that was one seriously chic polo match! 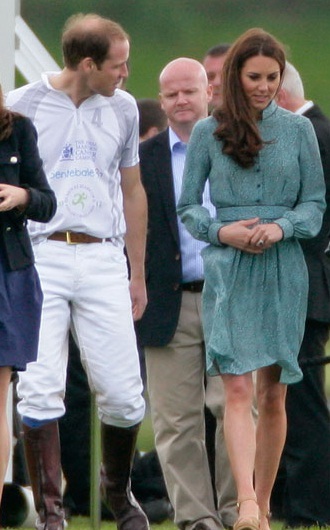 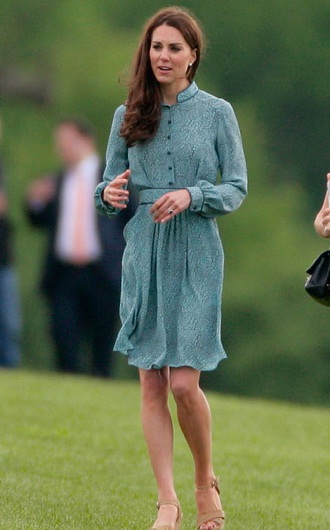