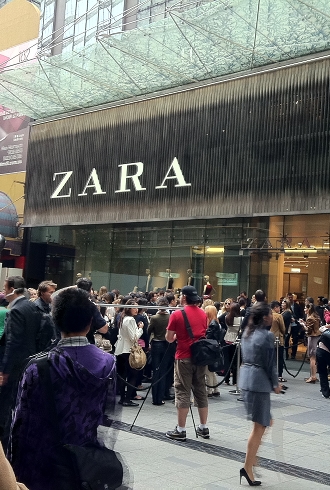 People in Sydney love queues. They revel in them. They will always tell you a bar is better if they had to line up to get in, and a Saturday morning is considered a failure if you didn’t join a queue winding halfway around a block to buy a loaf of sourdough bread. Sometimes they stand in a line just to see what’s at the other end. A good example of this was the launch of Zara’s first Sydney flagship in Pitt Street Mall last year, which for around two months after it opened still generated lines to rival those of Disneyland in summer. And with the chain now set to open a store in Bondi Junction, the madness is set to start again.

The open date is for now uncertain, but is said to be within the next few months and possibly even earlier. The chain is currently scouting prospective retail assistants/riot police to work in the store, which will stand where Borders bookstore used to on Level Four of the Westfield building.

Zara’s second Sydney store will be the fourth in Australia for the Spanish fashion powerhouse. The chain hit Adelaide’s Burnside Emporium at the end of last year, six months after the Bourke Street Mall store launch in Melbourne. It might seem strange for the chain to launch four shiny new stores in just a little over a year considering global retail sales were down last year, but what’s stranger is that Australians continue to pour through its doors despite the price tags being significantly higher than they are overseas.