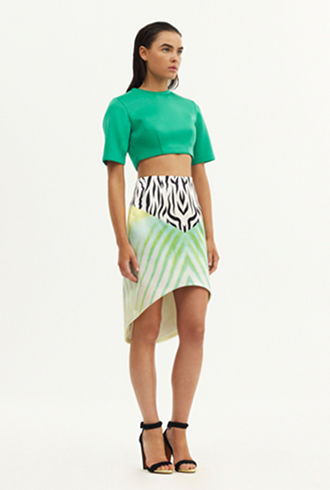 Josh Goot’s Resort 2013 collection plunges us into the briny waters of the Great Barrier Reef, and yes, there’s wetsuit material involved. This time, one of summer’s most inexplicably desirable fabrics has been rendered in bright tropical hues and scaly prints paying tribute to the colourful underwater animal world.

Oddly enough, this tropical outing is more subdued than the designers previous offering. Simple block colours offset the more intricate prints, and the collection as a whole hearkens back to the exaggerated silhouettes that Goot is famous for. Instead of sourcing more synthetic rubber than you’d find on board a boat of overweight deep sea divers, he’s fused silk onto thin foam, creating a more wearable (and commercially viable) version of neoprene and showing his signature aesthetic in a fresh (and far more pretty) light.

Pieces most likely to have the overseas market going bonkers over the Australiana affair include asymmetric hems and mesh cutouts that bestow a timely athleticism, plus a psychedelic Rorschach dress that has already been seen on his girlfriend, fashion editor and all-around sartorial mastermind, Christine Centenera. And while the majority of the collection is a celebration of what made Goot so great in the first place, it also introduces a new flavour in the form of knitwear. A first for the designer, this strain feels almost sterile in its rigidity and is the perfect partner for those extraordinary silhouettes. 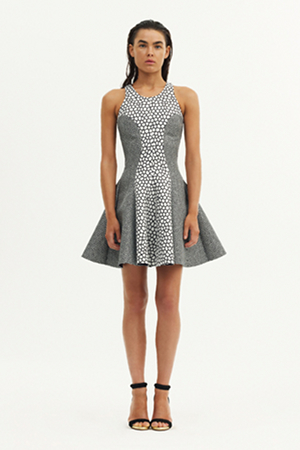 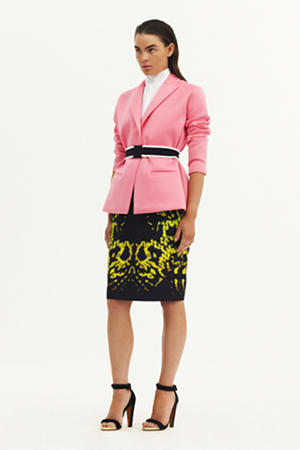