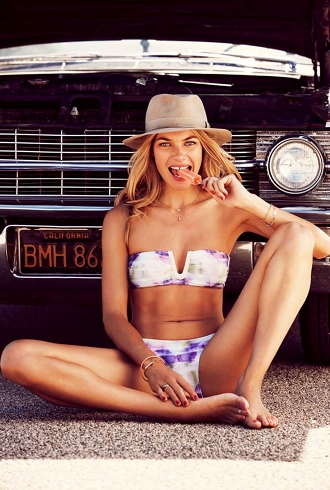 In what seems like only hours since she put her clothes back on after stripping down for Sass and Bide’s first lingerie campaign, Jessica Hart is showing of her insane figure once more as the face (and body) of Mambo SS 2013. The iconic Australian surf and street brand has named Hart as its 2012 “Goddess”, whipping her off to the Californian dessert with her friend and namesake Jessica Gomes to eat popsicles and ride around in shiny cars.

Hart is the latest in a string of in-demand models to be snagged by Mambo. Gomes took out the Goddess title in 2011, following such names as Jodhi Meares, Cheyenne Tozzi, and Erin McNaught. It’s a smart move for the brand, which has been around since 1984 and is as frequently associated with cheap mens cargo pants sold in Big W department stores as it is with gorgeous swimwear, ensuring they continue to keep it classy as well as accessible. That’s not too say that the Goddess line comes with a high-end price tag though, with all pieces falling between the $39.95 to $59.95 mark.

Mambo Goddess’ SS2012 campaign was brought into being by an all-star cast of Australian creatives including photographer Jason Ierace, stylist Imogene Barron and makeup artist Rae Morris. Soon after the campaign surfaced, the freshly cashed-up Jess was back in Melbourne taking her mum for a spin in a $340,000 Maserati Gran Turismo, but luckily her adorable smile means it is impossible to believe she’s anything but totally genuine.

Images via Chadwick Models and Mambo

SHARE ON FACEBOOKSHARE ON TWITTER
Link Buzz: Love for Alber Elbaz & Rachel Zoe’s Line Might Be in TroublePeople Are So Mad That Glamour’s EIC Interviewed Barack Obama
Jennifer Davidson