Yesterday morning saw the press launch of Rosie Huntington-Whiteley’s new lingerie range, Rosie for Autograph at the department store Marks and Spencer. The Victoria's Secret model and actress has created her own luxurious collection consisting of 33 pieces, which includes French knickers and silk lingerie cami sets. Apparently, Rosie explained that when she was younger, she actually dreamed of becoming a fashion designer rather than a model, so she really enjoyed designing the collection. We’re also pretty sure that she didn’t mind becoming an international model instead, nice back-up plan if you can get it! 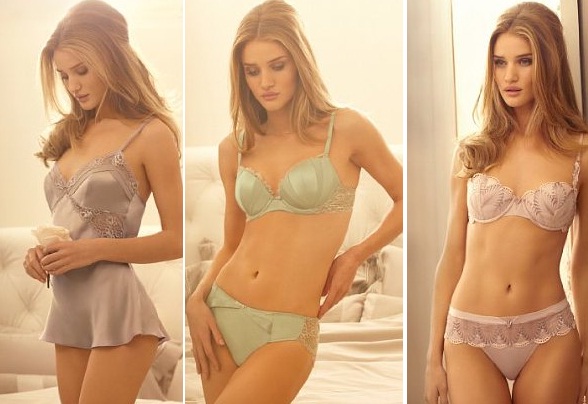 Rosie explained that her collection is influenced by the opulent elegance of the 1920s, as it’s her favourite era. In order to do her design research, she had to trawl through clothing and jewellery in her favourite vintage stores and flea markets in Paris, LA, and London. It’s a hard life! As well as also being particularly inspired by intricate patterns which she found in vintage magazines and design books.

Made from luxurious silk and delicately inspired French lace, her lingerie range is available in A to E cup, with certain pieces going through to a G cup. With prices starting at £12.50 for knickers, £22.50 for bras, and £65 for kimonos, it won't break the bank.

For the press launch (right), Rosie opted for one of Marks and Spencer’s very own peplum dresses, costing £55 from its Autograph line. She also accessorised it with one of their double leather belts, which is a total steal at £25, considering the amount of items you could wear it with. You can check out these gems, as well as Rosie’s lingerie collection on the M&S website