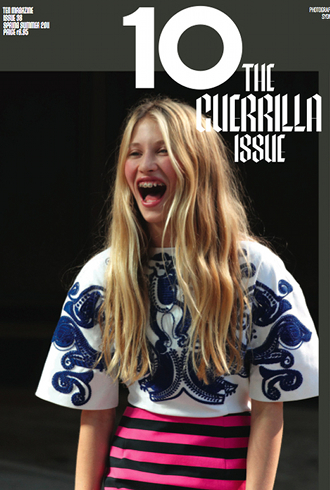 A few weeks ago, we got confirmation that Australia would get its own edition of Elle courtesy of ACP magazines. But now former ACP editor Alison Veness has one-upped the publishing powerhouse with news that she will launch local editions of high fashion Brit glossies 10 Magazine and 10 Men.

Inadvertently slapping the faces of her ex-employers, the former Harper’s Bazaar editor and founding editor of Australian Grazia will compensate for her two-year hiatus from print by taking on the roles of publisher, editor, and director of both 10 and 10 Men. The deal she’s landed with Zac Publishing will see the magazine launching as a biannual hardcover print magazine in February and as a digital title from September.

Veness left ACP back in 2011 as Grazia started falling victim to slumping circulation rates, turning her shrewd hand to strategy working as a brand consultant for Collette Dinnigan. But it appears she’s putting the current state of print down to a failure to sate our appetite for fashion both bold and expensive.

“10 and 10 Men is a natural fit for Australian consumers who are internationally renowned for their love of fashion and have a thirst for luxury across all platforms. 10 is an independent, free-thinking and credible fashion destination among a plethora of formulaic, celebrity-obsessed publications,” Veness asserted via press release last week.

Certainly 10 has more in common with independent local magazines that are thriving in the face of economic uncertainty. Oyster recently celebrated their 100th print issue alongside a boost in print advertising and exponential growth digitally, and Russh has experienced an 18% growth in subscriptions over the last year. They manage this, too, with smaller budgets than titles like Vogue and Grazia, so there’s no reason that a combination of Vaness’ smarts and 10’s cutting-edge content won’t cause the publication to thrive. The Australian version will allegedly feature much of the same content as its British counterpart, with the addition of material tailored to suit a local audience.