Josh Goot Pops Up in Paddington 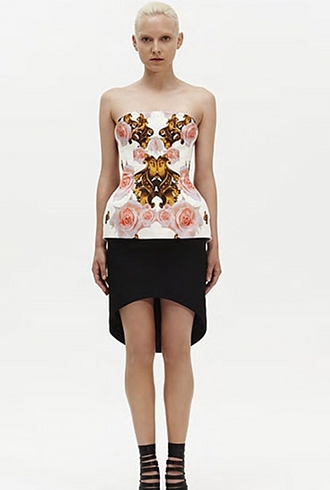 He’s Australia’s undisputed master of trippy digital prints and dimension-defying silhouettes, and his impressive new flagship stands as a literal incarnation of this strong aesthetic. A couple of weeks ago Josh Goot unveiled his new venture on Paddington’s Oxford Street with a fancy celebration filled to the brim with Sydney’s fashion elite. And after the Belvedere bottles have been cleared, it’s even better than you might expect.

Whitewashed walls and a dark granite floor make the space resemble an art gallery. All elements have been reduced to their very essence, ‘cause if Goot fears anything it’s the sight of an unclean line. Five industrial slabs of rough cement lining each side of the room support galvanized struts, from which each new collection will hang.

Besides cement, the store is thick with three further key elements of light, water and sky, the latter of which floods through a retractable glass ceiling and flows into the changing rooms. As if that didn’t demand enough attention, there’s also an actual pond forming a geometric shape around the rigorous configuration of the POS desk, yet somehow the world “minimal” isn’t entirely ill fitting.

Oh yeah, there are clothes in there too. They hang from the walls and move across the screens of four HD televisions placed around the store to showcase each new collection in motion. Calling dibs on the small number of hanging spots is Goot’s Spring/Summer 2012 collection, an acid trip of baroque prints and amped-up silhouettes that’s finally visible in the third dimension after its designer pulled out of MBFWA at the last minute. Luckily it’s things like this that make it impossible to hold a grudge against Goot.