X Factor UK’s First Live Shows and Not One Image Overhaul in Sight!

The X Factor is one of the UK’s biggest talent shows, and after waiting for what seemed like forever, its live shows finally graced our screens again at the weekend. New undiscovered singing talent aside, like every other year, we mainly watch it just to see who the best styled judge or contestant is! This year’s judging panel consists of popstars Tulisa Contostavlos and Nicole Scherzinger, and if you’ve managed to catch either of the two live shows that aired at the weekend, you’ll agree that so far, it’s Nicole who’s leading in the style wars as her outfits overshadowed Tulisa’s both nights running!

The contestants
One of the most exciting parts of the live shows is the unveiling of the contestants’ new looks, but this season, rather than giving all of its contestants a dramatic image overhaul, X Factor HQ has decided to let them develop their own personal styles. Below (from left) are three of our favourite contestants, Lucy Spraggan, Ella Henderson,  and Jade Ellis with their mentor judge Tulisa, and you can be the judge as to whether or not the no-makeover method was the right choice! 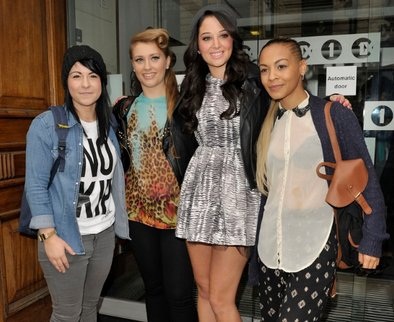 And here’s how the contestants' own styles were accentuated for their performances last weekend:

Ella Henderson
Throughout the audition and boot camp stages, Ella played it safe with girly floral dresses and simple asymmetric tops, topped off with a Victorella roll in her hair, which is fast becoming her trademark look, as she’s rarely seen without it. Unlike other years, whereby contestants were subjected to drastic hair cuts or dye jobs, Ella maintained her Victorella roll for the live performances, and her hair was simply teased into waves to update the look. Her girly style was tweaked to channel prom queen rock chic with an embroidered lace dress by Ted Baker and black flatforms by Chocker shoes.

Jade Ellis
Jade’s look most often has that East London vibe, and this kind of feel was kept as she rocked glam grunge for her performances in an LBD by Forever Unique, one oversized Moschino crucifix earring, and a pair of red boots by Office.

Lucy Spraggan
As for Lucy, who is typically most comfortable in laid back jeans and a T-shirt, she was pretty much allowed to keep her casual vibe, and performed in a dip-dyed shirt, black jeans, and red sneakers. Obviously, it wouldn’t be the most sought-after look of the night to emulate, but it definitely suited her.