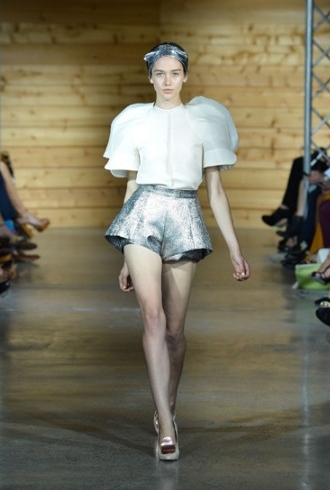 As Mercedes-Benz Fashion Week Australia enters its 18th year, it will move into a not-so-shiny new home at Eveleigh culture institution Carriageworks.

The change in locations was announced last week to a crowd of press and publicists by IMG Fashion’s Director of Strategy and Brand Development Elle Persson and Managing Director Peter Levy, who contended that Carriageworks would allow IMG to support the individual business objectives of the design community via a bevy of fresh partnerships.

One of these is a spruced-up trade show and exhibition programme called Premiere. This new initiative revamps the old Premiere boutique trade show, which showcases a carefully-selected slew of high end labels each year, bringing it on-site as part of the official MBFWA schedule. What this means for labels chosen to be part of the trade show is that they will have a greater chance of having their Spring/Summer 2013 collections snapped up wholesale by the greater number of national and international buyers present.

And it’s not just the game plan that’s moving forwards. MBFWA 2012 will creep forward on the calendar by a couple of weeks, kicking off on 8 April 2013 instead of trickling into the month of May to bring it more in line with other Mercedes-Benz international fashion events.

It’s a bold move for IMG considering Australia’s fashion week had become fairly settled in its somewhat flashier home down at the Overseas Passenger Terminal on iconic Circular Quay. By contrast, Carriageworks, a former block of 19th century railway workshops, is better known for hosting a weekly organic vegetable market and frequent performance art exhibitions. Though by hosting many events for this year’s Biennale of Sydney, Australia’s largest and most exciting festival of contemporary art, it’s proved itself more than worthy of housing the largest event on Australia’s fashion calendar. And at the very least, the move will minimise the number of tourists we have to elbow to get inside The Theatre.