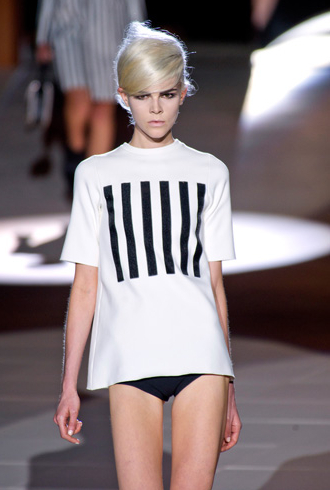 Ruby Jean Wilson is the professionally good-looking person from Australia to land a major campaign with Marc Jacobs. Wilson we be the face of the designer’s Spring 2013 campaign, lensed in perennially kooky Marc Jacobs fashion by Juergen Teller.

Granted, we saw this one coming after she opened and closed his Spring 2013 show and scored herself what was most likely an exclusive in Jacobs’ subsequent Louis Vuitton show in Paris, but it's still pretty big news considering she’s been making the rounds since 2009.

Wilson’s no doubt got the jawline, cheekbones, and impossibly willowy figure for an overexposed flash shoot, and here’s hoping the campaign will make excellent use of the Factory Girl vibes she radiated in such abundance on the catwalk back in September. Probably, it will do that and then some, with previous Marc Jacobs campaigns having put Victoria Beckham in a giant shopping bag and a series of bizarre miniature hats and turned Helena Bonham Carter into a highly textural inflatable mermaid.

Other Australian models to have found favour with Marc Jacobs include Codie Young, who appeared as the face of the ‘Dot’ fragrance, and Andrej Pejic, who landed the Marc by Marc Jacobs Spring 2011 campaign alongside Ginta Lapina.

SHARE ON FACEBOOKSHARE ON TWITTER
Williamsburg Fashion Webcam Is Creepy, Yes — But Also Kind Of GreatAb Fab Items Up for Grabs to Aid The Prince’s Trust
Jennifer Davidson