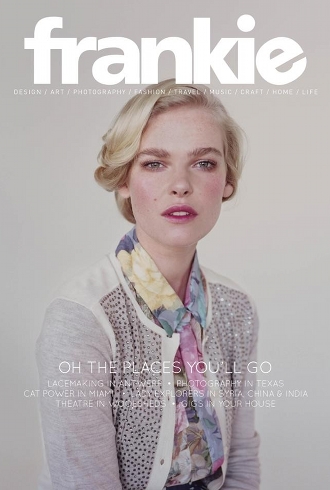 Published by Gold Coast company Morrison Media, Frankie has held a firm place in the heart of craft-loving Australians since its first issue hit stands in 2004. It’s thick matte pages serve up a massive bi-monthly serve of everything from indie art and fashion to under-the-radar travel and all things eco-friendly, while its simple covers keep things classy with a distinct lack of large-font headlines and exclamation marks.

Frankie has gone from strength to strength in recent years despite a drop in the sale of magazines in general. After trying their hands at a recipe book, a diary, and a calendar, the editors released a book dedicated to their love of interior design and crochet granny squares, and in August last year unveiled their very first men’s title Smith Journal. At the AMAs they revealed some pretty impressive stats including a nifty 35.47% year-on-year readership increase for the three months to June 2012. Frankie has just released its 50th issue.

Also deserving of big props is Russh magazine, which took out the awards’ Niche category.