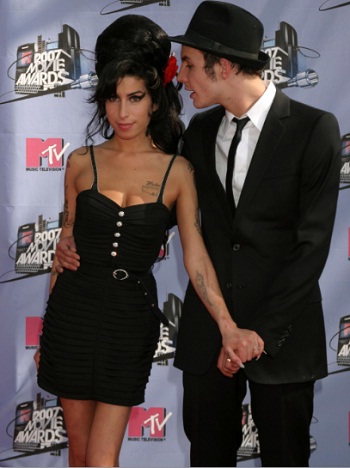 Subsequent to the tragic death of Amy Winehouse last year, her father Mitch Winehouse vowed to do everything within his power to support the Amy Winehouse Foundation and help disadvantaged young people, including those suffering from unfortunate and destructive addiction diseases. His latest plan of action was to auction off two pivotal items from the late singer and style icon’s wardrobe: her wedding dress in which she married her ex husband, Blake Felder-Civil, and a Moschino newspaper print dress that she wore during one of her famous performances on the Jools Holland show.

Her wedding dress was nothing more than a simple floral cotton dress worth around £100, but the fact that she chose to wear it to marry the love of her life in Miami in 2007 renders it almost priceless. They are a couple who will go down in British history, and it’s famously known that Blake shaped both the singer’s private life as well as her career. It was her infatuation with him that inspired some of her most famous songs and consequently made her an international household name, but sadly, he is also reportedly blamed for Amy’s drug addiction and self-destruction.

Amy’s former Camden home is currently up for sale, and so her family have arranged for all of her possessions to be tagged and logged, which includes the style icon’s priceless wardrobe featuring an array of extremely expensive designer garments. Unfortunately, during this process, the two items intended to be auctioned have mysteriously vanished. It appears that somebody has realised the worth of the garments, and decided to disrespectfully steal these rather than her plethora of designer goods.

The theft has come as a further blow to the Winehouse family, who has openly admitted that they are still coming to terms with the loss of Amy, and with the items being pre-valued to bring around £130,000 at auction, it’s also a huge disappointment for their charity. Investigations are currently underway to track down the culprit, but with no evidence of a forced entry, it’s proving quite the task. Fingers crossed that justice is served as soon as possible.