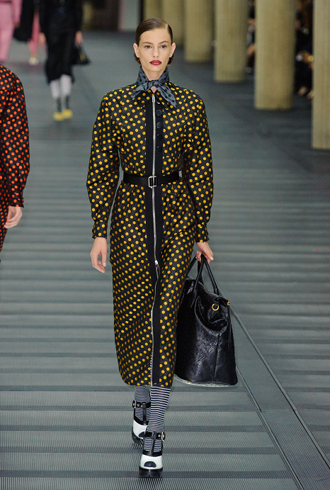 First, the 20-year-old walked Giles and Dion Lee in London, then last week she gave substance to hopes of a comeback by walking the Miu Miu show in Paris. Though Australia’s Next Top Model is the most successful in the franchise, responsible for names like Montana Cox and Alice Burdeau, so far no winner has yet managed to catch the discerning eye of Miucca Prada.

A couple of weeks prior, Cassi told The Sunday Telegraph that she was “more experienced in life now” and that the birth of her son had given her the motivation to not be an obnoxious teenager with little concern for things like cultural sensitivity and life goals. Back home she’s made a return to the tastemaking pages of Russh, which has always had a soft spot for the model despite her repeated displays of grating naiveté.

Cassi first made a name for herself by piquing frustration in the hearts of millions on ANTM, turning down a $2 million contract with Elite Model Management in New York to stay in Sunbury, Victoria with her then-25-year-old bricklayer boyfriend (10 years her senior).

One year later, at 17, she gave Paris a fleeting spin, returning home with nothing other than a warning to fellow budding models about the follies of calling Parisians “frog eaters and snail slurpes [sic]” when one of the most prestigious agencies in the world fails to land you a Balenciaga exclusive.