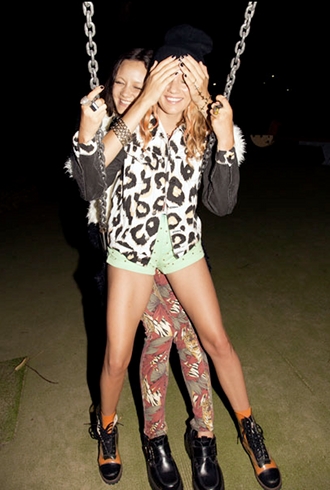 MINKPINK has just released a 2013 Global campaign to celebrate its launch into the U.S. market, providing enough inspiration to last you through approximately 25 Coachellas without ever repeating the same outfit twice.

Lending their bindi-adorned faces to the campaign are two of our favourite Aussie models, Montana Cox and Rachel Rutt, while kiwi Zippora Seven lends the crew some love from across the ditch. Sydney fashion photographer and person with the coolest name ever, Elvis Di Fazio, and stylist Pip Vassett of Yen cred comprise the rest of the dream team. And if you watch the campaign video you can get a further dose of summery all-Australianness courtesy of Sydney indie rock duo Palms.

Visit their website for a list of stockists, because while you can’t be these girls or (most likely) befriend them, at least you can now channel their insouciant 90s vibes no matter which side of the equator you’re on.

SHARE ON FACEBOOKSHARE ON TWITTER
The New Face of Saint Laurent Mens? Marilyn MansonLink Buzz: Alber Elbaz Would Like the World to Forgive John Galliano; Be Afraid of Smart Phone Neck
Jennifer Davidson