Zac Posen Designed New Uniforms for Delta and They Are Fly 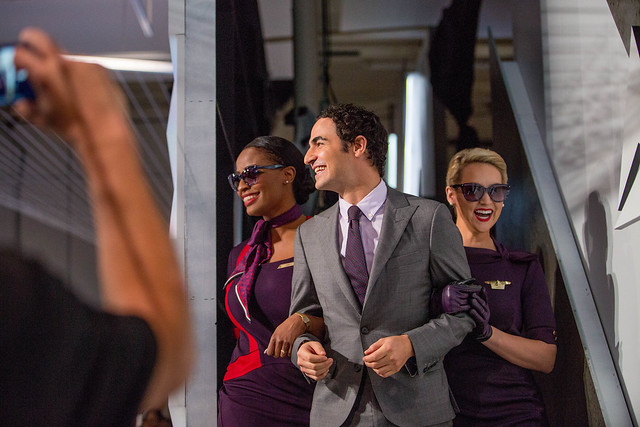 Ever daydreamed about leaving your earthly troubles behind, becoming a flight attendant and traveling the world on an airline’s dime? Or did we watch Catch Me If You Can one too many times? Regardless, with the news that Delta employees’ uniforms are getting a revamp courtesy of one Zac Posen, maker of glow-in-the-dark Met Gala gowns and evaluator of Project Runway contestants, we’re seriously considering taking to the skies in style.

Yesterday, in Atlanta (where Delta Air Lines is based), the partnership unveiled the new collection via a catwalk show (natch). Comprised of about four dozen or so looks, the new range will be worn by about 60,000 Delta employees (ticket and gate agents, Sky Club and flight attendants, technicians — mainly those employees who fliers see). Employees will be allotted points with which to purchase their outfits. Dresses, skirts, blazers, coats, shirts and pants will be assigned different values and employees can mix and match as they so choose, because personal style.

“We wanted Delta employees to look glamorous on the job without sacrificing functionality and style,” said Posen of the uniforms. “I worked alongside employees to understand how they interact with the clothes they wear and developed a look that empowers and excites, because we want Delta’s global workforce to exude the confidence and thoughtfulness that reflects the airline’s brand.”

Eye-grabbing differences between Posen’s uniforms and those designed by Richard Tyler back in 2006? For one, there will be no more of that classic blue, which employees said made them feel “ordinary.” The new designs, which will finally hit the tarmac in 2018, come in “passport” plum, “traveling” thistle, “cruising” cardinal, “skyline” slate and “groundspeed” graphite. They’re also less “frumpy” than the current uniforms: “Making all bodies look beautiful is really key,” Posen said. Subtle details like flared back panels, patterns that change in scale and smooth, ergonomic lines will help flatter all shapes and sizes.

On the technical side, Posen opted for stain-resistant, stretchy fabric enhanced with anti-bacterial materials. Skirts have rubber grips to help keep shirts tucked, the lapels on men’s jackets are at times sewn into the fabric for fashionable functionality. At the end of the day, uniforms are about enhancing performance: “These are people who have multiple tasks to do in their jobs. It takes great mental and physical concentration to do those tasks, and to be poised at the same time,” Posen told The New York Times.

Overall, Delta employees seem as psyched as we’d be to have Zac Posen as our personal stylist. Elaine Casanova, a 42-year Minneapolis-based flight attendant who served on the employee uniform review committee that advised Posen during the design process, said that the line is “professional looking, but it’s going to bring back glamour, which we had in the 70s.” There you have it — the glam resurgence is officially airborne.