Currently, the Queen’s Diamond Jubilee celebrations are in full swing in Britain. There’s literally no escaping the events and street parties, but it’s so nice to see people making an effort in their ladylike tea dresses! In preparation for the bank holiday celebrations last Friday, high-street leader Topshop invited designer label Meadham Kirchoff to take over its central London, Oxford Street store to fashionably celebrate the Queen’s sixty-year reign with a Jubilee party of their own. And how exciting it was!

The event didn’t seem to be that publicly announced, so it was really funny to see the shocked look on unsuspecting shoppers’ faces as they were disrupted from trawling through the rails by a crowd of Kirchoff-inspired orange wig wearing models who strutted into the store to the Spice Girls’ soundtrack. Of course, the models’ outfits resembled Meadham Kirchoff’s SS12 collection with pastel candy coloured basques and stockings. Shoppers were spoilt with free chocolates and candy; all of those children who had been dragged along to the shops by their mums were suddenly having a great time! Plus, shoppers who spent over £60 were lavished with more surprise gifts at the check-out. 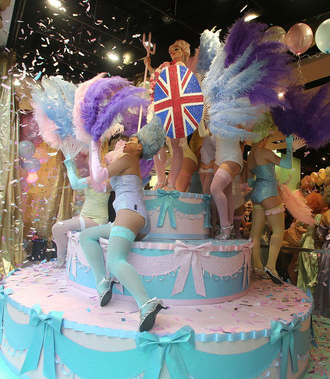 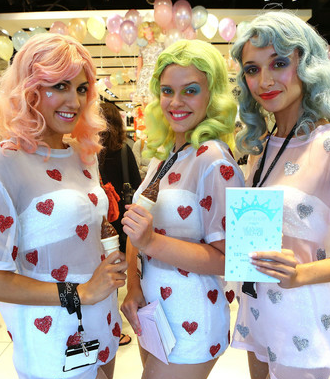 On Wednesday, we’ll be recapping the best of the Jubilee celebrations, so get ready to see some of the best British party outfits. For now, we're off to party in Hyde Park as we watch the Jubilee concert on the big screens. Bring on the Pimms!