The Digital Luxury Group is a company which conducts research on online consumer shopping habits, and they also compile the World Luxury Index, which is a list of the most searched luxury items. Results from the most recent World Luxury Index showed that the British shopper’s favourite designer item is the handbag. Out the window goes that age old stereotype that the British favour hats above everything else!

It was European designers who topped the most searched for list by Brits, with the British brand Mulberry being the most popular. It led with more than double the searches of the second place holder, French firm Chanel. The most searched for style of bag, however, came in the form of the crocodile skin Hermès Birkin, and of course, with crocodile skin being one of the most expensive skins around, it shows that those wanting to invest in a designer handbag desire a truly exquisite piece. As the use of salmon skin is on the increase within the luxury industry since it not only looks great but is environmentally friendly as it just uses waste salmon skin, could it be that we will eventually favour this style over the luxury crocodile skin? Only time will tell.

The Power of the Celebrity

Who knows why the British have such a love affair with designer hand candy? Could it perhaps be because we are a nation which is obsessed and heavily influenced by the power of the celebrity; celebrities who, when they are not being papped carrying designer handbags, they are collaborating on a range with a designer brand? For instance, who didn’t want to purchase a Mulberry Alexa (below) or a replica at the very least? Or, when Victoria Beckham previewed her new collection back in February, she unveiled the Harper (available in three colours, below), a designer handbag homage to her baby daughter. Get ready for this style to filter down upon the high street. 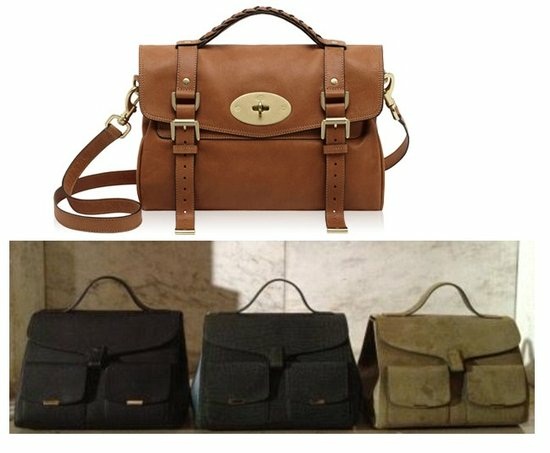