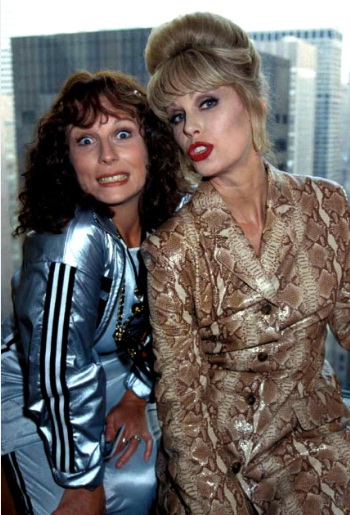 Amongst us fashion lovers, the British actress Joanna Lumley is probably best known for her role as Patsy in the cult comedy Absolutely Fabulous, which follows the lives of two crazy fashion industry insiders. Now, as many of us used to watch the show and laugh at Eddy’s overly fashion-forward, or perhaps more fittingly, fashion disasters, we also used to watch and drool over the much more fashionable Patsy’s wardrobe. So, what luck we’re in to have found out that Joanna is about to auction off some of the character’s garments.

The Ab Fab Pieces on Auction
The auction is set to take place on November 13 via Kerry Taylor Auctions in London to aid the Prince’s Trust, and tickets for the event can be purchased for £20. The key Patsy items up for grabs will include a pair of long nylon gloves which were worn in the Naomi Campbell scene, a Dolce & Gabbana black pinstriped jacket, a Joseph black leather skirt (you couldn’t get more Patsy than this piece!), a gorgeous pair of Dolce & Gabbana stilettos that she wore in the birthday motorbike scene, and that memorable Ryoichi Murata feathered hat in which she attended Eddy’s daughter Saffy’s wedding.

Other Must-Have Items
Joanna Lumley has been quite the style icon for decades in Britain, and even starred in the leading British TV show, The Avengers, so Joanna definitely has quite an extensive wardrobe from which to choose her auction pieces. For instance, she’s also donating much sought-after pieces like a pair of iconic satin corsets which she wore in The Avengers. She’s also decided to donate a few pieces which are particularly personal to her, such as a Moschino jacket which she wore to the Gurkha Welfare Trust’s 40th anniversary party, an organization which is close to her heart and for which she serves as ambassador.

To check out the full list of what’s up for auction, visit Kerry Taylor Auctions.