Accessories maketh the outfit, and they also maketh day four of MBFWA. Jenny Kee staged her first solo show since 1981 in The Box, turning the presentation space into a kaleidoscopic carnival of patterned silk scarves. The show was styled by Romance was Born and featured 30 years of archival material, and anyone who didn’t leave thinking that they had just witnessed one of the best things ever was probably just stupefied by three decades of crazy condensed into one small space.

Colour was also, as always, the name of the game at We Are Handsome. The digitally printed halcyon daydream was this time triggered by pin-up swimwear mixed in with some classic resort pieces like maxi skirts, and some not-so-classic ones like full-length mesh and Lycra bodysuits. Forties-style swimsuits featured pretty rose patterns, and Indhra and Jeremy’s love affair with Miami manifested itself in palm tree-lined sunsets.

After that show, the tendency was to stumble out into the sunlight in a blissful haze, but those who pulled themselves together for the dash across to Martin Place for Aje were dutifully rewarded. Design duo Adrian Norris and Edwina Robinson’s inaugural MBFWA collection featured more sequins than a Mardi Gras parade without sacrificing their nonchalantly cool elegance. Statement dresses mixed sequins, mesh, fishtail skirts, and scalloped micro hemlines all at once, and it worked — even when paired with beaten leather boots. 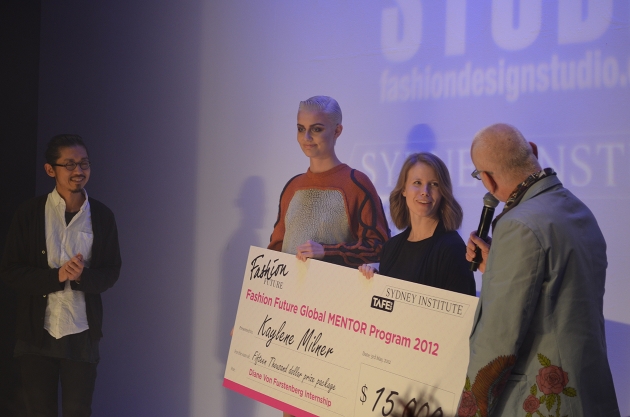 Young blood continued to flow thick and fast at TAFE graduate show The Innovators, which began with the presentation of a $15,000 cheque to Kaylene Milner (above). The former musicology student has been selected for an internship with Diane von Furstenberg, thanks to a patchwork-luxe collection combining earthy furs with insanely good tailoring, knitwear, and leatherwork. Other graduates to keep your eye on include Carlie Waterman and Christopher Baldwin (below), who are both making the future of Australian fashion very bright indeed.

To all those wondering if it was too soon to be calling Jenny Kee’s presentation the best show of fashion week, the answer was “yes.” Or at least “maybe” because Christopher Esber’s show was the perfect antidote to three-and-a-half days of laser-cut short shorts. The insane mirrored runway splintered his luxurious, minimalist and meticulously tailored collection into hundreds of beautiful pieces that shattered any concern this National Designer Award-winner might not live up to the hype. 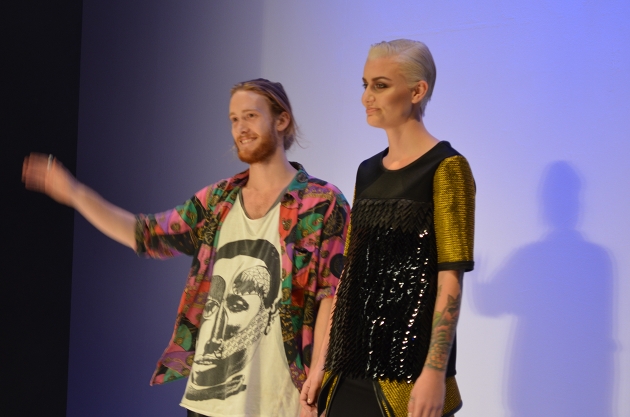